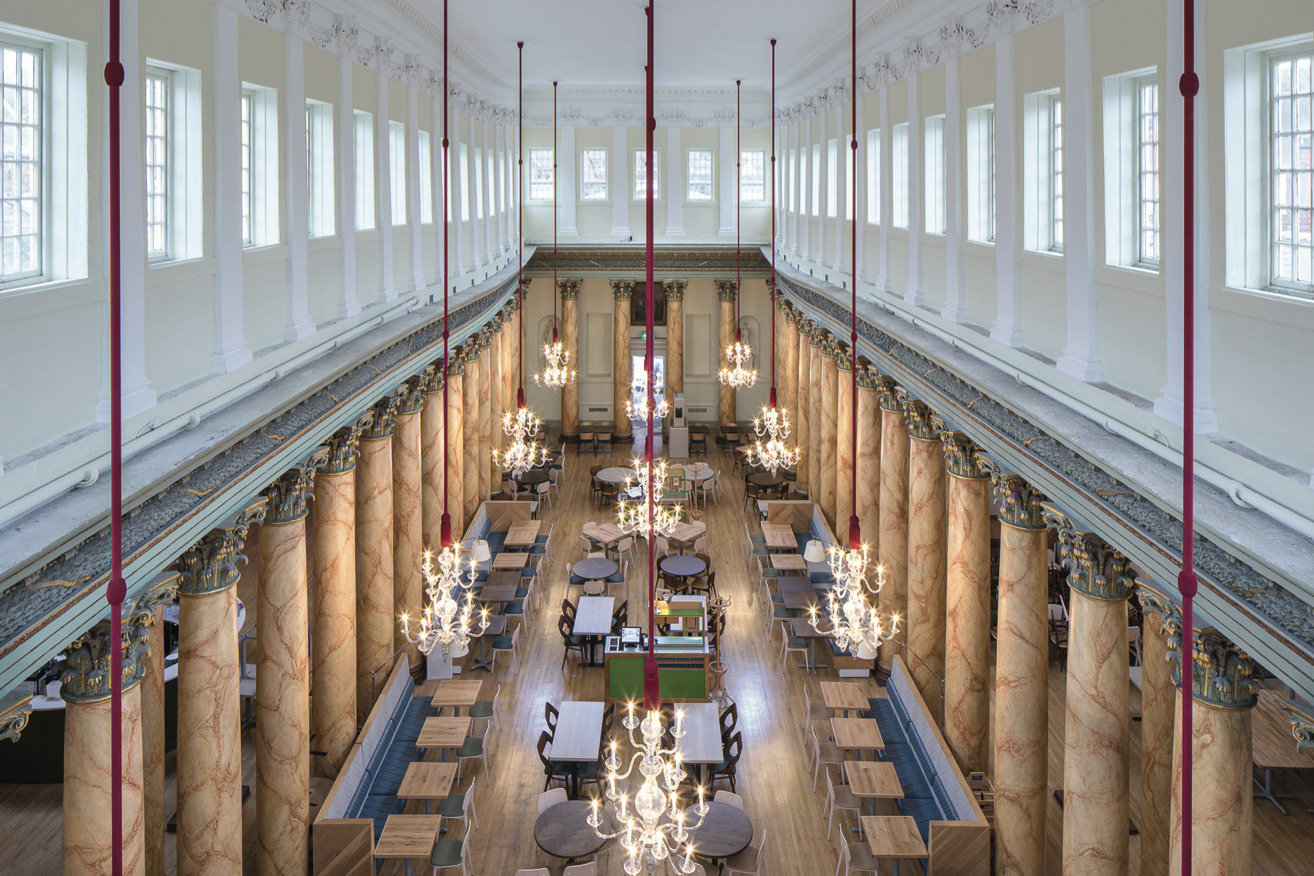 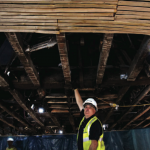 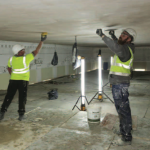 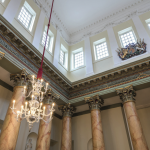 The Assembly Rooms in Blake Street, York, were completed in 1735, some 36 years earlier than the famous Assembly Rooms in Bath, and are probably the earliest example of neo-classical architecture in Europe.  They are therefore of considerable importance and a Grade 1 listed building.

Their creation, financed by public subscription, was a pioneering project undertaken for twelve appointed Directors by Yorkshire-born Richard Boyle, 3rd Earl of Burlington, who was inspired by the work of Italian Renaissance architect Andrea Palladio. The need for such grand buildings came about because the landed gentry had increasingly gravitated from gathering in their country seats to “assemble” in fashionable cities. They wanted places where they could socialise and be entertained in grand style.  The popularity of York Races in the social calendar was another important consideration.

The York Assembly Rooms provided a large high-ceilinged dancing room approximately 90 feet long with Corinthian columns made of stone but with a plaster skin painted to resemble marble and moulded plaster capitals and entablature above. There were adjoining rooms for playing cards, taking refreshment and indulging in other entertainments.

During the 19th century social, political and economic factors combined to bring about cultural changes and the number of “assemblies” dwindled.  The building was adapted to meet new uses, such as for meetings of arts and other societies and then most recently for commercial purposes.

The Assembly Rooms are now owned by York Conservation Trust but leased to an Ask Italian restaurant, which had to be closed from April to October 2017 so that urgent repairs to the ceiling could be carried out.

Ornate Interiors had initially been asked to carry out restorative work to the capitals on top of the columns and to clean the cornices. However, workmen noticed irregularities on the ceiling which suggested that parts of the plaster were starting to come away from the lath base. Further investigations confirmed there was a risk of the ceiling collapsing onto diners seated at tables 26 feet below.

Part of the lease arrangement is that the premises are open for public viewing and available for City of York Council functions on five days a year. One of these, the inauguration of Cllr Barbara Boyce as the new Lord Mayor, was imminently due when the extent of the problem became apparent. Trust property manager Ian Daniells commented: “The last thing we wanted was the Lord Mayor to be getting her regalia on and then have the ceiling fall down!”

As an emergency measure the ceiling was made safe by placing supporting plywood boards across the whole of the ceiling. Laser beams were directed across an 800-point grid to monitor the boards for any signs of movement. Ornate Interiors then set about the complicated and challenging project of replacing the ceiling, using authentic techniques to safeguard the special character of the building and replicating original materials. Lime plaster is breathable, a quality that makes it the only appropriate option for historic buildings.

Samples were provided for local planning authority approval before work commenced and recording was carried out in accordance with Historic England guidance as set out in Understanding Historic Buildings: A Guide to good recording practice. Records were included on the local Historic environmental record to show the special interest of the building.

Once the ceiling had been made safe the roof space was cleared of an estimated 3 tonnes of surplus weight to reduce the load. The plaster lining to redundant Victorian air ducting was removed. The framework and some original laths were retained for evidential value. Safety checks for asbestos and gypsum were carried out. Simpsons of  York undertook the removal of the ceiling under the supervision of Ornate Interiors staff.

It took a full week to erect a 10-metre high ‘birdcage’ of scaffolding to provide safe access.  Masonry support walls below floor level were checked to ensure they could carry the load, and the scaffolding was then aligned with these.  The roof space was fully encased with plastic sheeting to seal it from other parts of the building and a 70mm layer of dust and debris that had accumulated over three centuries was removed.

Structural repairs were then made to the roof and new laths of finest quality hand-riven oak were installed, spaced at thumb-width so that a good rivet of plaster could be pushed through to set behind each lath.

The time-consuming process of applying the first layer of plaster – the ‘scratch coat’ – then began. This coat is the thickest layer and consists of sand and lime heavily enriched and strengthened with horsehair. The plaster was checked regularly from above to ensure there would be a satisfactory fixing behind the laths. It was then left for several weeks to allow the chemical reaction with carbon dioxide in the air to take place and set the mixture, a process known as carbonation.

The next stage was to apply the ‘float coat’, for which the same plaster was used but with less hair admixed and applied to about half the thickness. The float coat was carefully looked after to ensure it cured properly, and then three weeks later the finishing coat was applied. This was a fine skim of sand and lime plaster. Once the last coat of plaster had set the ceiling roses were refitted and mineral paint, which bonds with the plaster and allows
it to continue to breathe, was applied in a three-coat system.

The scaffolding was then removed and the ornate Murano-glass chandeliers, which had been painstakingly restored by a specialist firm in Norfolk, were re-hung on chains and safety wires, with new tassels fitted.

The overall cost of the project was in the region of £400,000 including £50,000 for the restoration of the chandeliers. A re-opening event was held on 15th November 2017 and the Mayor was invited to switch on the Christmas lights.

“The emergency ceiling repair at The Assembly Rooms was a complex and challenging project and we were delighted with the positive and proactive attitude displayed by all the contractors involved.

The main piece of work was the replacement of the Great Assembly Room ceiling. This work was undertaken by the skilled craftsmen of Ornate Interiors, who worked tirelessly and diligently under difficult conditions to replace the full lath and plaster ceiling using exactly the same materials and techniques used when the ceiling was first erected in the eighteenth century. It was an immense achievement to complete the project to a very high standard in such a tight window of time.

View and download this case study in PDF format…

View a collection of interesting images in this project lookbook…