The addition of a Bath House and Chapel to a Country House Estate in Gloucestershire completed a major project which gained recognition in the Georgian Group Architectural Awards when Craig Hamilton’s East Pavilion extension to the main house and new Bath House won The Giles Worsley Award for a New Building in a Georgian Context in 2012 and the new Chapel was declared winner of the New Building in the Classical Tradition category in 2018. 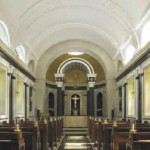 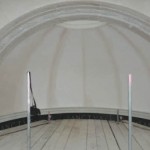 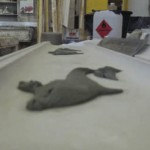 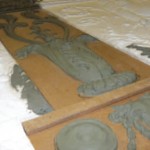 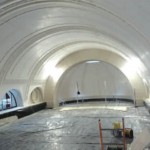 The original building dates from the early 17th century. In the late 18th century the exterior was re-faced to create the classical order and symmetry that was in vogue at the time, and a large service wing was added to the north side of the house. In the mid-19th century unsympathetic changes were made, disturbing this visual symmetry. Immediately after World War II the service wing was demolished, leaving two of the frontages looking badly damaged. A large conservatory that had been added at one time was also demolished, further blemishing the appearance of the building.

In 2007 a new owner appointed Craig Hamilton Architects to design and manage the restoration, renovation and extension of this grand Grade II-listed property. The extensive programme of works included building a new two-storey East Pavilion with a double-height back entrance hall designed in Greco-Romano Mannerism. The second stage of the project comprised the addition of separate new buildings in neo-classical style: the Bath House – which contains a swimming- pool, changing rooms and a downstairs gym – and a private Chapel.

Ornate Interiors were asked to provide the traditional plastering craftsmanship necessary to realise a unique vision: buildings that incorporate the imposing structural elements of classical temples with many embellishments alluding mainly to the temple of Aphrodite, the goddess of beauty who arose from the sea, but also, more discreetly, to Angus Og, the Celtic God of Love.

Commenting on the contribution made by Ornate Interiors, Craig Hamilton wrote:
“The work they executed was outstanding and was undertaken in their usual positive and enthusiastic manner, with nothing being too much trouble, in order to achieve the high standard we asked for.”

Most of the walls throughout were finished with lime sand plaster, a comparatively straightforward process when working on upright faces, but requiring considerable skill when shaping the curves of the extensive extrusions. FIbrous plaster was used for the spiral staircase lunette and string moulding and for the lunettes in the Chapel.

Different types of ceiling were created to achieve varied effects. The Bath House features a coffered ceiling above the pool, formed from rectangular panels sunk into suspended grids and finished with graceful mouldings. Another striking example of this effect is the circular coffered ceiling over the spiral staircase. There is an arched ceiling in the spa lobby. Barrel-vaulted ceilings create a contrasting effect in the lobbies of the steam room, sauna and gym. Intersections of barrel vaults form groin-vaulted ceilings in the spa and changing rooms, while there are simple arches to the ceiling of the wc. 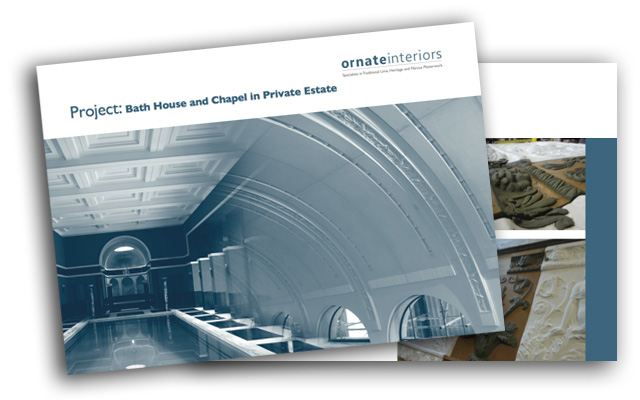 Perhaps the greatest challenge was completing the complicated barrel-vaulted fibrous plaster ceiling in the Chapel, which was replete with fine detailing and elaborate ornamentation. The fixing of this ceiling posed an additional challenge because work had to be carried out above the fully-finished Chapel.

The elaborate ornamentation used throughout both buildings involved the manufacture of moulds in the Ornate Interiors workshop, prior to installation on site. Having obtained permission to take casts from original historic mouldings, the Ornate Interiors craftsmen made new clays to extend the patterning round the pool ceiling. Grecian-style friezes and an original ceiling rose designed by Craig Hamilton were also manufactured off-site, as were the friezes featuring swimming dolphins – yet another bespoke design.

A marble model was supplied for features in the Chapel. This was scaled to fit the domed semi-circular ceiling and reproduced in plaster. Vine mouldings were manufactured and installed as drape mouldings along coffered recesses. Moulded friezes were made for display on the arches of the domed ceiling.

View and download this case study in PDF format…
ORNATE-CASE-STUDY-Private-Bath-Hse-chapel.pdf

View a collection of interesting images in this project lookbook…
ORNATE-LOOKBOOK-Bath-House-and-Chapel.pdf